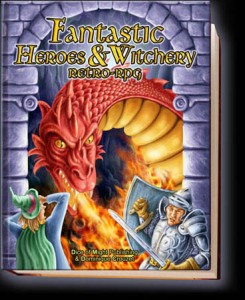 Fantastic Heroes & Witchery is a simulacrum of the well known role-playing game that features fighters, clerics and magic-users prowling mysterious dungeons, and combating dragons to take their treasures. It is not a clone of a particular edition (like OSRIC being a clone of “1e”), but a combination of several editions from “classic” to “3e,” to which were added a lot of options. In fact, if you are already acquainted with a previous edition of the game, this one is very similar, and thus you already know the rules. The main differences do not consist in new and complicated game mechanics, but in providing new classes for the Science-Fantasy, Swords & Planets and Horror genres, and handling priests in a different way.

OSR Compatible: Most (if not all) adventures published for earlier editions of the game or its clones, are usable with Fantastic Heroes & Witchery. Then, spells, magical items and monsters created for earlier editions and clones, are also still usable with this game as they are. Then, game masters’ manuals and supplements, as well as campaign settings, remain useful when you run Fantastic Heroes & Witchery rather than the game they were created for.

Dice of Might publishing, is a small “indie” company owned by Dominique Crouzet, intent on releasing other gaming books if Fantastic Heroes & Witchery is well received. Dominique Crouzet (aka “DOM”) is otherwise a graphic designer, available to do your layouts and old school art for a fee. See his website here.

Fantastic Heroes & Witchery is available as a free PDF (see the download section), though for a fully bookmarked, easy to navigate file, purchase it on RPGnow at a cheap price. Then, the book is also available in print copy (both hardback and paperback) on Lulu.com, but also Amazon.com.